Name 5 game designers off the top of your head…

Now try to name the top 5 most impactful games. For that matter, try to keep it to just 10.

I’m sure your own lists would differ. I can’t imagine that everyone would agree on all of these. However, it does seem universal that the games themselves are what people remember, more so than the people who made them. Without going into the reasons for why that might be, I want to share a few game developers in particular and their impact on video games.

I really love seeing people put together “best of” lists for games. Especially if it involves whole communities of people. Then my absolute favorite is when you see a giant “bracket challenge” sort of list that claims a single winner. Regardless of the placement, one game that always seems to finds its way onto these lists is Tecmo Super Bowl- especially when it comes to sports titles. 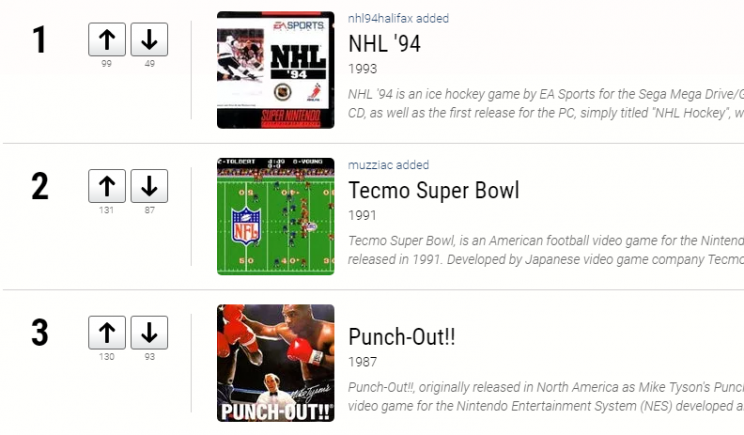 Snippet from Ranker’s “The Best Sports Games of All Time‬”

Well it is impossible to overstate how much of an impact Tecmo Super Bowl has had on Basketball Classics. In my mind, TSB stands in a class of its own. It’s not just about the NFL licensing either. Even as a sequel, the game was the first to accomplish so much. So who is responsible for such a masterpiece?

Lou Raguse had a fascinating write up about “The Fathers of Tecmo Super Bowl” where he researched not only who made the game, but their process in making it. You can check it out here:
http://louraguse.com/2016/02/the-fathers-of-tecmo-super-bowl/

What does this have to do with us? During development of Basketball Classics, Josh and I reached out to Akihiko Shimoji, the lead programmer of Tecmo Super Bowl. It almost seemed silly to think that we could somehow work with an absolute hero of ours (not to mention the fact that we were using automatic translators and googling whether or not it was customary to bow in a video message).

To our amazement, we received a response. Seriously, the lead programmer of our favorite video game actually responded to us. And what’s more, he tried out the game and came back with several messages filled with wisdom. Even though he was clear about retiring from video games, he was kind enough to lend a hand and help out a tiny indie game like ours. His input has meant a lot to us and we have pored over it. I feel it has been crucial to the success of Basketball Classics.

His guiding principle is simple- recreate the sensation of the sport. Akihiko advised us to focus on flow and rhythm. While working on Tecmo, he said that they had to be willing to shorten or remove interstitial scenes (to the groans of artists I’m sure) in order to keep the rhythm of the gameplay. Just check out this perfect kickoff sequence…

This concept is fascinating to us. It is at the core of what makes Tecmo a timeless classic. It simply feels the best.

How this has actually impacted our approach to Basketball Classics shows up in countless aspects. From the music cues to the celebration overlays, to our new dunk system and even the play calling, we have tried to focus on rhythm- always trying to capture the sensation of pro basketball.

A huge thank you to Mr. Shimoji for your thoughtful advice. Your example and humility is inspiring. We really hope to create a game that you would be proud of.